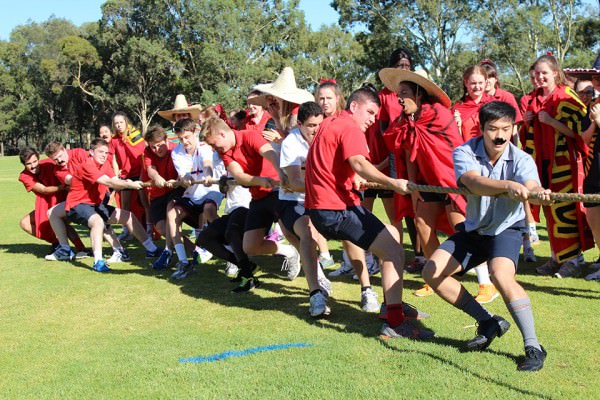 On Friday 7 February the Senior School students participated in some House activities during Pastoral Care and lunch time.

The day began well with all houses gathering on Bourke Oval to compete in their year level tug-o-war competitions. House Mentors and Captains addressed their teams and there was much cheering and house spirit as students moved into year groups to test their strength. Many of the battles were close, with students giving their all for their houses. After the finals for each group, the winners were announced as:

At lunch time, the students supported the Jesuit Mission fundraising BBQ in fine form, eating their way through around 500 sausages and raising nearly $800! At the same time, the Year 12 students participated in a fun house relay where they were dressed in flippers, inflatable rings and goggles whilst having to throw a water balloon at a target. This event provided many laughs as well as highlighted the wonderful friendly rivalry between the houses as they competed to have the most unbroken water balloons at the end of the time.

The final result was very close between Campion and Xavier, whilst the House Mentors and Captains from Kostka and Regis ended up the wettest!