I recently learnt about another great Australian woman who is recognised for her heroic virtue and is being considered for canonisation. Mary Glowrey (1887−1957) was born and raised in regional Victoria. She grew up in a loving, faith-filled home. At 13, she received a scholarship to attend South Melbourne College, boarding at the Good Shepherd Convent. In 1904 she was College Dux. Mary transferred a scholarship for an Arts degree at the University of Melbourne to the Medical Faculty. She graduated from the University of Melbourne with a Bachelor of Medicine and Surgery in 1910.

Mary was the first woman appointed as a residential doctor in New Zealand. Later she was appointed to the Royal Victorian Eye and Ear Hospital in Melbourne. Mary gave free medical advice in poorer suburbs, often giving away her clothes and blankets to help those in need. In 1915 she read about a Scottish Catholic doctor and her medical work in India. A religious order in India, the Society of Jesus Mary Joseph, were seeking medical women to join them. Mary sought advice from her spiritual director, William Lockington SJ. After having undertaken further studies in gynaecology, obstetrics, and ophthalmology, and less than a month after she had been conferred the Doctor of Medicine degree, Mary departed for Guntur, India, in 1920.

In India the sisters provided basic health care to outlying villages, where the need was great. Mary and other sisters walked in the heat through mud and dust to attend patients. Mary supervised the medical care of hundreds of thousands of people. Her commitment was fortified by her profound devotion to the Holy Spirit and her extraordinary trust in God's guidance. Mary led the development of medical facilities including the founding of Saint Joseph's Hospital in 1925. She researched traditional healing methods and practised a holistic approach to health care, recognising the body and soul as interconnected. 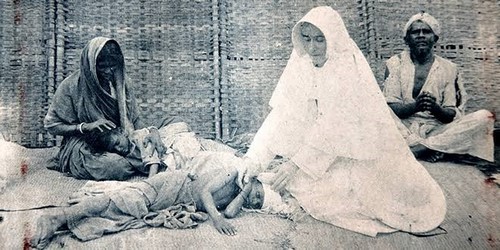 Above: Mary attending to a patient

Mary helped develop a Catholic healthcare system to train women. The Government recognised Saint Joseph's Hospital as a medical training school. The Catholic Hospital Association was founded in 1943, and she was elected as the first president. Today, this association has over 3500 member institutions and cares for more than 20 million people each year in India. Mary died in 1957 and was buried in Bangalore.

She was a pioneering doctor who used her gifts as a laywoman and religious in the service of others in Australia and overseas. Her life benefited many, especially the most vulnerable during her 37 years in India. The cause for her canonisation commenced in 2010, and in 2013 she was declared a Servant of God.

We remember all in our College community. May our prayers comfort those suffering at this time. May God’s blessing be a source of support in their sorrow and loss, and bring courage, patience, and hope.

For those who have died: